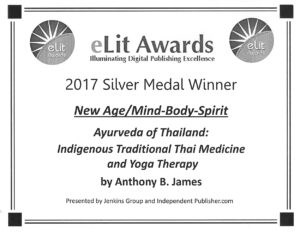 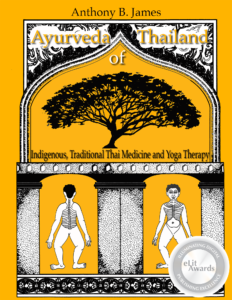 Ayurveda of Thailand: Indigenous Traditional Thai Medicine and Thai Yoga are part of what makes Thailand, Thailand. The Royal ( Court or “Southern” Style) is the most classical form.

The book provides clear and concise instructions and details for the practice in a clinical setting. Over 160 photo and graphic illustrations present each traditional application in a logical format.

Readers will especially appreciate the detailed and well researched history and medical anthropology of Thailand’s great contribution to the world heritage of indigenous, traditional medicine systems. Thai Yoga Therapy is on par with Traditional Chinese Medicine and others.

It has become the nucleus of a new lifestyle and right livelihood for the thousands of US and Thai students, practitioners and teachers. Indigenous, Traditional Thai Massage (Indigenous Thai Yoga Therapy), also called “Ryksaa Thang Nuad Phaen Boran Thai” or the “ancient Chirothesia (Yoga Therapy) or hands-on healing” of Thailand, is born of a long tradition.

This unique system of indigenous, traditional, natural medicine and Yoga therapy finds it’s ancient roots first in the traditions of classical Ayurveda as far back as the 5th century BCE. Subsequently, the Vedic health and medical practices eventually became common practice in SE Asia. Burma (Myanmar) and Thailand were heavily influenced by succeeding generations of Buddhist influence, philosophy and practice. Some form of this traditional medicine has been taught and practiced in various locations for about 2500 years.

Two ways to get the book: Ayurveda of Thailand: Indigenous Traditional Thai Medicine and Yoga Therapy

Trade Paperback: Only $19.95: To review or order the paperback order on Amazon CLICK HERE!

Kindle Edition: Only $9.95: To review or order the Kindle version CLICK HERE!