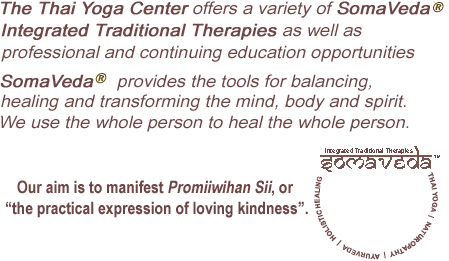 What are additional expected benefits of SomaVeda® Thai Yoga Programs and Therapy?

The secondary/ incidental outcomes are of lesser importance and may or may not share characteristics similar to or common to many forms of western massage and massage therapy. Some hands on are similar to effleurage (stroking and kneading the muscles), manipulation (manipulating or aligning osseous or skeletal parts) and pressure point or acupressure style technique (applying deep, consistent pressure to specific nerves, tendons, or ligaments and accupoints or Lom).

For more specific details I recommend reading the reference textbooks “Ayurveda of Thailand” and ” Ayurveda and Thai Yoga, Religious Therapeutics Theory and Practice.”

Where Can I Learn Thai Yoga and Traditional Thai Massage?

1) The Native American Indigenous Church (NAIC) provides a registry of approved schools and teachers of SomaVeda® style Thai Yoga and Thai Massage as well as Authorized and or Approved Certified Providers.
NAIC Members are legally entitled to practice SomaVeda® Thai yoga massage in all fifty states. Of course that means as long as what is practiced is not in violation of existing medical laws or that the practice is under the umbrella of an ecclesiastical authority or organization. We are happy to answer any questions that you have pertaining to the legal practice of our energetic and spiritually based art of healing and transformation.

2) The Thai Yoga Center: In the US today the traditional lineages of Thai Yoga and Thai Massage are passed on via the in Brooksville, Florida through the Mastery and teaching of Aachan, Dr. Anthony B. James DNM(P), ND (T), DOM, PhD, MD(AM), DPHC(h.c.), MSc, RAAP, SMOKH. Aachan, Dr. James, Ordained Minister, Diplomat, Licentiate Monastic physician, after 34 plus years of extensive devotion, practice and research brings several different and complimentary traditional lineages to life.

There are several other significant lineages, teachers and Grand Masters. Most important is the Buddhism medicine derived from the famous Saint Shivago (Jivaka). In the United States traditional lineage and teaching is primarily passed on via the educational programs of the SCNM: SomaVeda College of Natural Medicine/ School of Ayurveda: Thai Yoga Center  in Brooksville, FL.

We recognize all schools formally recognized by the Royal Thai Ministries of Health and of Education and The Union of Thai Traditional Medicine Society (UTTS) listed or not!

There are actually quite a few different traditional “schools” of Thai yoga massage. They range from the big university driven or supported programs of Bangkok, to the “family” style oral and traditional lineages of Thailand’s Northern Hill Tribe people such as Karen, Lisu, Lahu, Mien and Akha People. Their influence is a growing factor in the modern expression of Thai Massage, especially in the North.

Thai Yoga is a colloquial or geographically distinctive system. Modern Thai yoga massage is a synthesis of several different regional variations based on location, region and in some cases the specific influence of a charismatic teacher. Traditionally there was mention of the “Seven Schools”. Of course there was not in the past only seven schools! Considering this was the primary medicine of millions of people for over a thousand years it is logical to assume there were many different schools in operation at one time or another. For example, every temple teaching or practicing these healing arts could have been considered a school and there were hundreds if not thousands of these over the years.

The most famous traditional school in the north is The Buntautuk Northern Hill Tribe Medical Hospital or “The Old Medicine Hospital.” Under the auspices of Grand Master Aajan Sintorn Chaichagun (Transitioned November 2005) it has become a national and international phenomenon. Teaching various levels of programs to Thai and falang (foreigner) alike, Aajan Sintorn was also famous for his daily recitation of the Pali Om Namo Shivago prayer and invocation for blessing. Twice each day he would lead the entire community in this rhythmic and beautiful traditional mantra for healing. In the north they say, “you don’t know Thai Massage until you know this mantra!” Today the Wat Po Association of Traditional Doctors, member schools and Aachan’s or Master Instructors are bringing this work into the modern world. Famous schools and their head Masters such as Anantasuk Rongrian under both Phaa Kruu Anantasuk and Aachan Nantipa Anantasuk work with the King’s Rajaprajanugroh projects to completely document the traditional medicine and preserve its rich heritage.

Northern Thailand is closer to main land China so there is more Chinese and Laotion influenced massage techniques. For example, a well known teacher and practitioner in Chiangmai, Mama Lek Chaiya and her family teach what is called “nûat jàp sên” (nerve-touch massage), a Chinese-style massage technique that works with the body’s nerve meridians much like acupuncture. Some of the plucking techniques are reminiscent of Tuina and can be quite unpleasant. However, the ultimate aim of balancing the chi takes precedence over comfort!

It is important to remember that any and all applications of physical pressure are intended to convey the ProMiiwihan Sii to balance and harmonize the “thâat tháng sìi“and Tri_dosha or Three Winds, Humors or energetically based body types. Thai yoga is a sophisticated system of exchanging love with pressure, just as a hug can convey care, consideration and love with physical pressure. It’s just that in Thai Yoga that loving embrace is conveyed with great detail and sophistication.

The practice of Thai Yoga is substantially based on principles of classical Ayurveda as described in the Caraka Samhita Sutra, Susrita Samhita Sutra, Gheranda Samhita, Atharvaveda, Pradipika, and Ramayana, without most of the overt references to Hindu deities. The philosophies and principles of these Ayurvedic texts have also been re-interpreted in Theraveda Buddhism. Two influential texts in the Theraveda system are the Buddha Dhama and the Vipassana Bhavanna. Ayurvedic practices emphasized in Thai yoga include Samkhya (Sanskrit= Satkhya), Creation Cosmology, Rajas, Satvas and Tamas, Dhatus, Doshas, Sen Lines (Prana Nadi), Lom (Wind Gates, Sanskrit= Marma), Pancha Karma, Asana, Prana Yama, and Mantra.

From the Ayudthaya period until early this century, the Thai government’s Department of Health included an official massage division (phanâek mãw nûat). Under the influence of international medicine and modern hospital development, the responsibility for the national propagation/maintenance of temple based Thai Ayurveda was eventually transferred to Phra Wat Chetaphon (Wat Pho) in Bangkok, where it remains today. Traditional Yoga therapy has persisted in most of the provinces and there has recently been a resurgence of popularity throughout the country. The Wat Po system is divided into two completely separate and distinctive categories: the tourist massage pavilion and Tourist massage school, (Rongrian Sala Thaang Nuat) and the School for traditional Medicine for training and certification of Maw Nuad (Massage Doctors). There are huge differences in the term and quality of training. For example, a tourist may receive an introductory massage certificate in as little as ten days, where the full program for Maw Nuad is twelve to fourteen semesters or four full years. In the United States we have many different levels of recognition’s for Certified Thai Yoga/Massage Practitioners.

The Royal Thai Ministry of Health relies on the Union of Thai Traditional Medicine Society (UTTS) to formulate and maintain standards of practice and competency necessary for formal licensing of secular, non-religious professional Traditional Thai Medicine providers in the kingdom.

Within the traditional Thai medical context, a Thai Yoga massage therapist (mãw nûat, literally, ‘massage doctor’) usually applies Thai Yoga together with pharmacological (herbal) and/or psycho-spiritual treatments as prescribed for a specific problem or specific imbalance of the Dosha or winds and humors of the body, mind, and spirit. It is becoming quite popular for many Thais to also use traditional Thai Yoga as a tool for relaxation and disease prevention, rather than for a specific medical problem. However, once you leave the big city and move into the country you begin to see more reliance on the application as energy based medicine. This includes the resurgence and growing popularity of the self treatment regimes and Yoga practices of “Reusi Dotan” or Reishi Yoga.

Thai yoga, Traditional Thai Yoga and or “Thai massage” is not the same as “Massage,” “Massage Therapy,” or “bodywork,” as commonly defined in so-called “Massage Laws.” The term “Thai Massage” is western slang, mostly promoted by tourists in Thailand. Although the use of the term is now common, it still is misunderstood and misused by the misinformed. It is easy to be confused when similar words are used, such as “Massage,” but legally there are distinctions and differences in definitions.

Please note: In common English when we use the word “massage” we do not mean it in the same context as the typical western usage. In the west “Massage” means something like a “rub down” for money, or “Systems of activity applied to the soft tissues of the human body for therapeutic, educational, or relaxation purposes” and is primarily referring to mechanical and or manipulative systems derived from Swedish Massage and Massage Therapy. “Thai Yoga and or Thai Massage” (Phaen Boran Ráksãa Thaang Nûat) is completely unrelated!

Legally words can have different meanings than words used in common, non-legal language. For example, “Massage and Massage Therapy” definitions are based on the practice of “Swedish massage.” “Swedish Massage” is new (less than one hundred years) in European and American culture. According to the National Center for Complementary and Alternative Medicine “The term “massage therapy” encompasses many different techniques (see box for examples). In general, therapists press, rub, and otherwise manipulate the muscles and other soft tissues of the body. They most often use their hands and fingers, but may use their forearms, elbows, or feet”.

Compare this definition with the definition given for what is Thai Yoga at the beginning of this article “Thai Yoga is comprehensive, sophisticated spiritual, philosophical and energy based healing arts derivative of Theraveda Buddhism, Buddhist medicine, Buddhist Psychology, Theraveda Vipassana Bhavana, Classical Indian and Tibetan Ayurveda and Yoga Vedanta. “

Thai yoga therapy (Thai Massage) sounds similar to Western-style massage at first glance, but what is not mentioned in the proceeding definition is that Indigenous Traditional Thai Massage (ITTM/ TTM) is a spiritually i.e. Ayurveda based system of healing and movement education (Yoga). It is based entirely on principles of Classical Indian/ Thai Ayurveda, energy balancing (Sen, Tri-Dosha, Lom, Chakra etc.) and the actual touching, contact or soft tissue manipulation is incidental to, and not the central aim of the practice! I want to emphasize this statement again “It is possible to have a Thai Yoga session with little or no actual touching”. However, touching is good! Many spiritual traditions literally demand believers and followers to “Lay Hands On The Sick, Lame, Blind, Deming” and so forth as a sacred duty and responsibility. This work brings fundamental elements and energy into harmony and creates wholeness of mind, body and spirit.

Thai Ayurveda, Thai yoga (traditional thai massage) is a spiritually based Chirothesia and or Somatic technique and profession, a modality with standards established in the Buddhist holistic centers and temples thousands of years ago. It has an established code of ethics known as the Buddha Dharma, The Eight Fold Path, Ahimsa (non-violence) and the “Ten Rules of the Healer.” This healing tradition has been adopted by the Native American Indigenous Church as an Indigenous Traditional Native Medicine as is perfectly suited for both Native and non-native persons alike to share and practice. Traditional Indigenous Medicine and healing practices are protected by both UN and International Treaty as well as US Federal code. See NAIC Legal Compliance.

There is an established criterion for education and professional practice for services that were never intended to be “Massage” or “Massage therapy.”