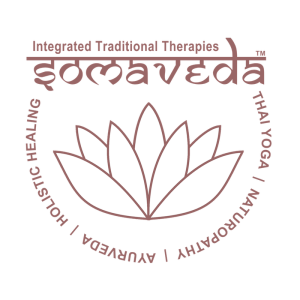 When we talk about SomaVeda Integrated Traditional Therapies® and SomaVeda® Thai yoga, we are also talking about it as being based on a code of ethical conduct. It’s not just a system or methodology of healing. It is the art of being. So, how do you practice the art of being? We say that there are basically eight things that you want to incorporate in your life in some way, shape or form in order to have a noble or ethical way of life as a healer. Our iteration/ formulation of the Thai Yoga Eight Fold Path is based on Patanjali’s Yoga Sutra. The Yogic Eight Fold Path is literally called “Ashtanga” which means the “Eight Limbs”. We additionally incorporate understandings found in the Theraveda Buddhist Noble Eight Fold Path (ariyo aṭṭhaṅgiko maggo) adapted to our particular work and practice as healers, therapist and Doctors of indigenous traditional natural medicine.

In considering the application of the eight limbs or branch concept to the practice of Yoga therapy specifically, I consider Swami Vivekanadas words.  Swami Vivekananda translates the Patanjali Sutra’s definition of Yoga “Yoga is restraining the mind-stuff (Citta) from taking various forms (Vrittis). In Vedic cosmology the very incarnation of the spirit or conscious essence into the realm of the physical body is a process of encapsulation into ego. As the ego is limited in all of it’s manifestation’s, distortions are inevitable. These distortions bought on by the ego/ mind (mind-stuff) are the cause of all disease and imbalance. Yoga Therapy’s purpose in this context is the same as any other traditional Yoga in that it seeks to restrain, limit or transcend the Vrittis or distortions of ego. More commonly we call this “Distortions of Dosha” or Vikruti.

Think of each one as a recommendation of a practice or quality of life and self work. Cultivation and simultaneous practice of these different steps in the Thai Yoga Eight Fold Path will lead the practitioner to a happier and more balanced and rational life expression based on morality, ethical conduct and self discipline.