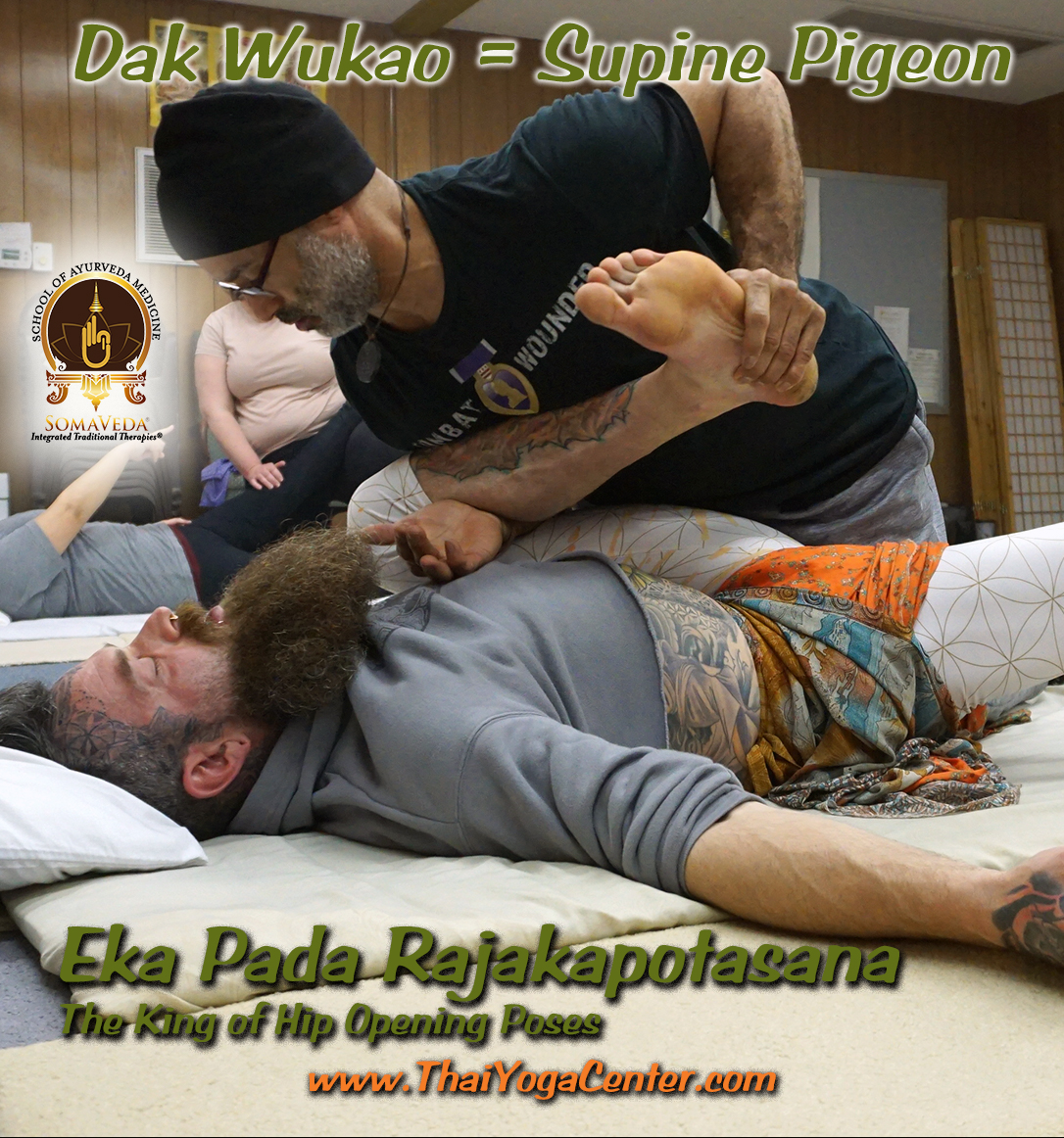 by Ajahn, Dr. Anthony B. James

of the SomaVeda College of Ayurveda and Thai Yoga Center

In traditional Hatha Yoga parlance this posture is know commonly as the “Sleeping or Half Pigeon Pose or asana.

In the SomaVeda® Thai Yoga applications or clinical usage we add the “facilitated” as it would be very difficult to perform this yoga therapy posture on yourself. Yes, it is easy and possible to do the generic Hatha Yoga version by yourself, on yourself… using your own body position and body weight to create downward pressure on the pinned leg.

The SomaVeda® Thai Yoga based clinical application rotates the affected leg through four or more positions individually in sequence to progressively release obstruction in the hips. Each of the incremental position emphasis are designed to create a wave or progressive release of not only the hip but all connected joints, below and above the pelvis it’s self… i.e. from ankle, knee, pelvis (anterior and posterior), sacrum, S.I, and low back! Not only it the art of the positioning complex on behalf of the therapist, but there are further considerations of Energy, Attention, Consciousness, Breath and Pressure which the therapist co-facilitates as they guide the patient, receiver through the process of receiving! One example being the use of Prana Yama technique specifically appropriate to the release and desired outcome.

Each of the four primary positions is meant to be only an ideal application and not precisely an outcome in and of it’s self. Each progressive positioning creates it’s own corrective stress and opportunity for either the release of obstructed Prana, Chi, Breath and or the energy coirculating through the Thai Sen Lines (Kalarthari, Ittha, Pingkala, Sahatsaransi, Thawai, Nantakrawat and Khitchanna) as well as the primary meridians of the lateral, medial and posterior leg… ( Gall Bladder, Bladder, Liver, Spleen and Kidney).

This beautiful sequence based progressive rotation into the four positions also acts as a traction and decompression technique for the joints involved themselves as well as for the major tissue, muscle, connective tissue and fascia! It can be especially powerful in decompressing the knee and the hip facilitating fluid transfer, reduction of inflammation and exchange of vital energy and nutrients which may have become stagnant due to injury or atrophy from lack of use.

According to one source looking at it from a physical therapy lens “It intensifies the action innthe hamstrings of the front leg because of the deeper hip flexion and more compression over the front leg. At the same time, it dminishes the action in the back hip and spine. By adducting the front leg, the piriformis is brought into lengthening action”, {Kaminoff}.

In my opinion this then greatly reduces any direct impingement or pressure on the sciatic nerve reducing sensitivity and or “sciatica” type of pain.

Dak Wukao is a passive range-of-motion type of therapeutic hip opening posture (asana) working the hip, lower back, ankle, and knee. This posture is 180 degrees rotation of the classic Yoga

Position: Move up close to the hip, positioning your body with knees spread in such a way as to frame the hip. Raise the client’s knee upright and have their shin parallel to the floor.

The first three positions are set up the same way, with only the active hand (Live Hand) moving or changing position. Additional emphasis is to direct the knee towards or slightly outside of the shoulder on the same side to avoid binding the lower abdomen. 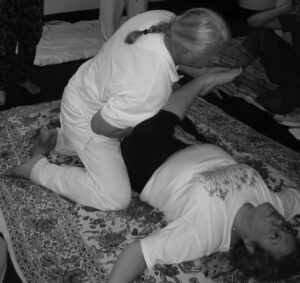 Position 1. Wrist: The practitioner takes the bent leg of the client with the lower hand and places the wrist of the top hand tight behind the knee. He then leans forward bracing the shoulder against the outer knee of the client. Pressure is applied by simply leaning farther forward, pushing the bent leg downward toward the client’s chest. Hold the bottom most position 5 seconds, then slowly release by backing up. 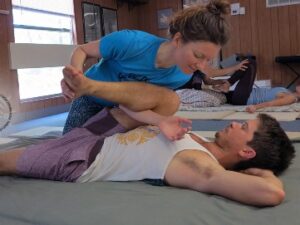 Position 2. Middle Forearm: The practitioner takes the bent leg of the client with the lower hand and places the middle forearm of the top arm behind the knee. He then leans forward bracing the shoulder against the outer knee of the client. Pressure is applied by simply leaning farther forward, pushing the bent leg downward toward the client’s chest. Hold the bottom most position 5 seconds, then slowly release by backing up.

Position 3. Upper Forearm: The practitioner takes the bent leg of the client with the lower hand and places the upper forearm of the top arm behind the knee. He then leans forward bracing the shoulder against the outer knee of the client. Pressure is applied by simply leaning farther forward, pushing the bent leg downward toward the client’s chest. Hold the bottom most position 5 seconds, then slowly release by backing up.

The last and final position is to remove (roll out) the top arm entirely from behind the knee, and with one hand holding the foot and one on the knee, with straight arms, press the leg as far toward the body as possible, by leaning forward, then release slowly.

Indications: Provides the external rotation and flexion that your hips need to remain agile; releases tension in your hips from sitting all day. Stretches the thighs, groin and Psoas muscles, abdomen, chest and shoulders, and neck, compresses and stimulates the abdomen, abdominal organs and the energetic structures of the Chakras, Sen Lines,Lom/ Marma from the feet to the core of the body.

In traditional application we work the affected side asymetrically and emphasis the affected side (male or female) with whatever is the appropriate Dosha balancing emphasis of Vatta, Pitta or Kapha indicated. The means either faster,

Because of the powerful and specific energetic and core focus, the client will often experience emotional release and or the triggering of Old Unresolved Negative Emotional Issues “NEMO’s”. Now is a good time to manifest the hand of healing!

The illustrations included in the article are from the book by Ajahn, Dr. Anthony B.James “ Ayurveda of Thailand, Indigenous Traditional Thai Medicine and Yoga Therapy” Meta Journal Press © 2017 All rights reserved.