May 2, 2006, The Director for the Department of Export Promotion, Ministry of Commerce, Royal Thai Government, Thai Trade Center, Chicago issued a formal letter of recommendation. Director Kanya Amorntheerakul stated in the body of the letter…

“On behalf of Thai Trade Center-Chicago, We are pleased to recommend Dr. Anthony James, President and Director of the ITTA (The International Thai Therapists Association, Inc.) for a teaching position at the Anantasuk Nuad Thai School in Hua Hin, Thailand.

In 2002 , he was our VIP guest and a Keynote speaker for our head office, the Department of Export Promotion, the Ministry of Commerce of the Royal Thai Government at the Thailand Health and Beauty Show.

Dr. James received “Friend of Thailand Award 2002″ Presented by the Tourism Authority of Thailand (TAT) as our office nominated him for this honor.

His beloved Thailand makes him devote himself to promote Thai Culture and Tourism through organizing groups of students from the USA to study Thai Massage and Yoga in Thailand.” 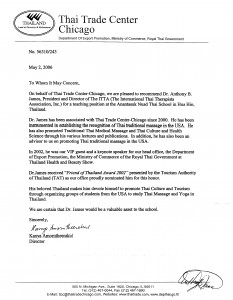 Original Copy of this letter available on file with NAIC office.